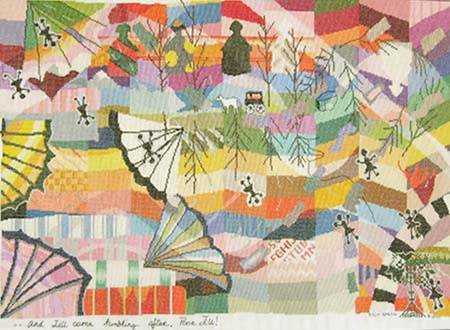 Elly Smith: ‘The stitch is based on a nursery rhyme – Jack and Jill went up the hill to fetch a pail of water, Jack fell down and broke his crown and Jill came tumbling after.
It all began with viewing a friend’s quilt show: 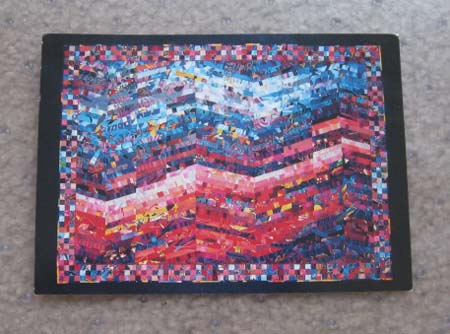 I was bedazzled with the light effects and the wonderful orchestration and interplay of her fabric strips and all the colorful little squares I wondered if I could get that same wonderful effect with my cross-stitch.

So I drew up a chart and started stitching – until I became thoroughly bored with the task. So then I decided to use it as a background. The Jack and Jill verse reminded me of a real life situation – of a marriage where the husband fails and his failure affects the wife. He breaks his crown and she comes tumbling after. I started researching this idea. There isn’t a reason given in the rhyme for Jill’s fall except that it seems to be a direct result of Jack breaking his crown. In the American version Jill is the one who is punished for causing Jack’s disaster and in the british version she is punished for laughing at Jack’s disaster.

Oh, by the way there’s a hidden face somewhere: 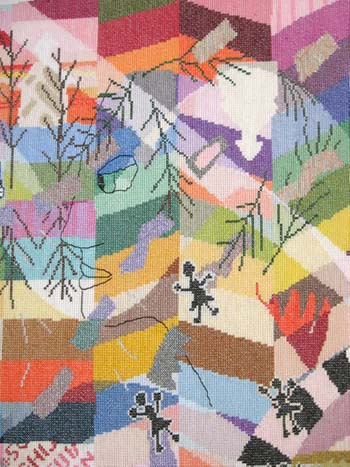 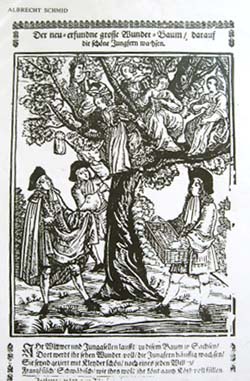 Another inspiration was discovering a German woodcut of men sitting in a tree and another where the women are sitting in a tree. Something I loved doing myself when I first came to the United States, I would find solace in sitting in a tree – hiding from my rambunctious cousins who were speaking a language that I could not understand. My escape hatch. The little houses are the result of Jack’s demise. Of course I have lots more information regarding this work… any questions I will be happy to answer.’ 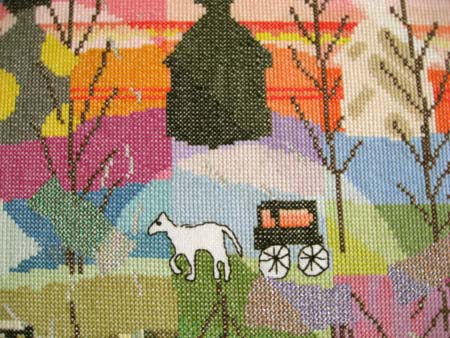 Ik vroeg aan Elly of de ‘waaiers’ een betekenis hebben. Haar antwoord: ‘The fans – as you call them – are actually spider webs – at least in outline. I am the spider – my thread being the mode of my expression so to speak it ties in with ariadne. I have used this symbol several times in other works… there’s also a stack of fabrics – for quilts – on the lower left… the trees are also brooms – female symbols of subjagation, subservience etc.’