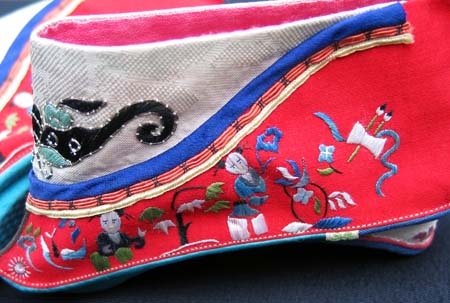 ZHENGZHOU – The color red, which represents luck, happiness and passion in China, could have been used in clothing 15.000 years ago.

Li Zhanyang, a researcher with Henan Provincial Institute of Cultural Relics and Archaeology, said in an interview with Xinhua on Wednesday.

The Xuchang ruins made headlines in foreign media in January when State Administration of Cultural Heritage announced that Chinese archaeologists had found a human skull dating back at least 80.000 years in the ruins last December.

According to Li, this month, their excavation team found from the soil strata dating back 15.000 years, or the late Paleolithic Era, at the Xuchang ruins more than 20 pieces of hematite, one of iron oxides commonly used as a dyestuff, alongside three dozen thin instruments made of animal tooth enamel, plus seven needles made of the upper cheek tooth enamel of a rhinoceros sub-species now extinct.

It is the first time in China that iron oxide of such high concentration has been excavated from the ruins of the late Paleolithic Era, claimed Li.

“Through excavation, we are confident that these hematite were deliberately brought to the Xuchang ruins from afar by ancient people, as Xuchang does not produce such minerals,” said Li.

The ruins used to be the location of a lake where activities such as clothes making, food preparing, water drinking were clustered, said Li.

Li said lab work proved the thin instruments made of animal tooth enamel might have be used as articles similar to buttons in present times.

“There has been evidence suggesting people dating back 15.000 years could have made advanced fur apparel. If that is true, the most popular color might have been red,” said the Chinese archaeologist.

The Paleolithic site at Xuchang was discovered in 1965, when Chinese scientists found animal fossils and stone artifacts from soil dug for a well. The most recent large scale excavation started in June 2005.

The archaeologists declared in January this year that they found the fossil consisted of 16 pieces of the skull with protruding eyebrows and a small forehead from the excavation last December.

That find was heralded as the greatest discovery since Peking Man and Upper Cave Man skulls were found in Beijing early last century.

Besides the skull, more than 30.000 animal fossils, and stone and bone artifacts were found in the Xuchang ruins over the past two years. The pieces were fossilized because they were buried near the mouth of a spring, whose water had a high calcium content, according to Li.